In her April 2016 Presidential address to the Population Association of America (PAA), Judith A. Seltzer reviewed significant milestones and issues in family demography in the United States. She highlighted two studies in which the UW Survey Center played a key role. The longitudinal National Survey of Families and Households was a landmark in family demography in the United States. UWSC collected the third wave of data under the leadership of James Sweet, who was Director. 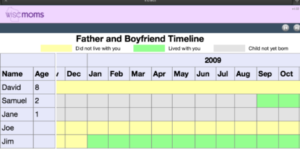 The 2012 WiscMoms study was cited for its pathbreaking measurement of family complexity. In WiscMoms, UWSC technical staff and instrument development staff partnered with IRP investigators Maria Cancian, Daniel Meyer, and Lonnie Berger to build an instrument that used a tablet to display complex timeline information that the respondent had provided to stimulate the respondent’s memory and to allow the respondent to review the information for accuracy.